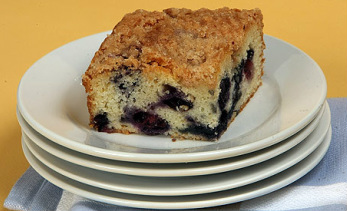 1. In a bowl, combine the sugar, flour, cinnamon, and butter.

2. Work the mixture with your fingertips until well blended; refrigerate.


1. Set the oven at 375 degrees. Butter an 8-inch-square metal baking pan. Dust the pan with flour, tapping out the excess.

2. In a bowl, toss the blueberries with 1 tablespoon of the flour.

3. In another bowl, whisk the remaining flour, baking powder, and salt to blend them.

5. Remove the bowl from the mixer stand. With a rubber spatula, fold in blueberries. Transfer the batter to the pan and smooth the top. Sprinkle the topping over the cake.

Adapted from Jane Connelly- Jane Connelly of Scituate sent this cake into the Recipe Box Project, for Boston Globe readers to share their favorite dishes. It won first prize in the summer of 2011. A Hokum Rock Farm patron brought it to us to share with others.