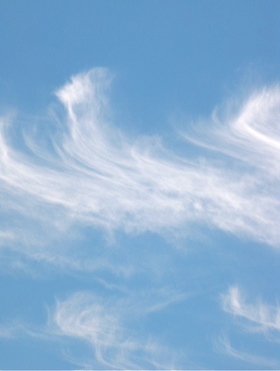 As we enter a new year we hope for nothing but blue skies ahead for us all.

Impossible, of course, but as Emily Dickinson wrote, hope is that thing with feathers that sits in the heart. And it is that spirit we all like to bring to every new beginning.  So though I know it will rain and snow, be too cold and too hot, and that the skies will often be gray, I also know that without one the other would be impossible.

For those of you worrying about how this winter's mild weather is going to effect next summer's crop- stop worrying. Here is a little science. High-bush blueberries in the Northeast require about 800 hours of what we refer to as chill time. The chilling requirement of a fruit-bearing bush is the minimum percentage of cold weather required before it can set blossoms. The botanical math is a rather inexact science calculating the total accumulation of hours in which temperatures are 30-40 degrees F. They do not need snow nor do they need extreme cold. Dormancy begins once the canes of the blueberry bush turn red, which usually happens in mid-November and lasts until March and they will remain dormant until their chill time is achieved.

Looking into the future, global warming could change nature's timetable completely, but not for some time around here.