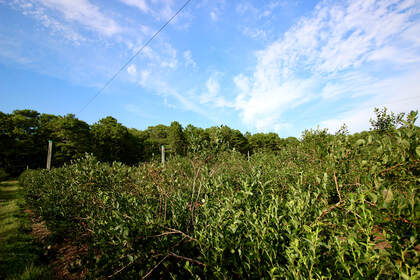 The summer has flown by, at least for us; as we turn toward the fall though it is not without a sense of anticipation. We are looking forward to returning to the beach for long walks with our dogs, for quieter roadways, and for that general calm that is the spell of fall here on Cape Cod.

The work ahead of us at the farm includes some new tasks of note. First of all, we will have to address the extreme dryness of the soil, due to the lack of rain in late summer, with increased irrigation. We have some pruning before us that we don't usually do, and advise against in the fall: due to extensive pruning this spring (following minimal pruning in 2020) there was some damage to the plants once the berries ripened and became to heavy for the bushes without their normal support branches. And weeds, as always weeds but this year the bittersweet is a real nuisance. We will tackle these chores as the days cool and shorten, but gladly so.