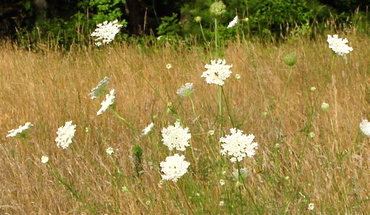 The farm's last day of the 2013 season was on Saturday August 17th. We are not usually open that late. We had closed temporarily for an extra week for ripening in the lower field, unfortunately, the long-anticipated and much-dreaded reappearance of the Spotted Wing Drosophilia (Asian fruit fly) coincided. You may recall this invasive insect made its first appearance on the Cape, and at our farm, in August of 2012. As far as we can tell, they spoiled about 30% of our final crop which had the effect of our having to limit pints on the last day. We regretted having to end the season that way but were grateful they didn't appear any sooner.

The entomologists will now do their work, with some samples and statistics gathered at our farm, and hopefully find a long-range solution to this new problem. We will keep you posted.

Meanwhile, the approach of autumn becomes more apparent every day. By month's end the last of our nets will be rolled up, opening the field to the sky and the waiting birds- for their own feasting.