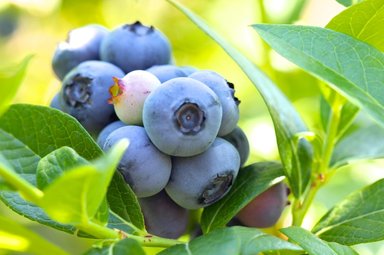 ​As of July 3rd- we are almost there! It takes a little over three months for blueberries to be at this stage- that is, ready to be picked and eaten. In April, the buds began to open. In May, leaves unfurled and tiny white flowers formed for bees to pollinate. Small green berries then emerged. Green leaves worked the magic of photosynthesis. The berries grew fuller and changed color through June and now into July. It takes about a week to ten days to sweeten up once a blueberry has taken on its rich blue hue. It is always weather dependent.

For the farm to open, enough berries must have reached this stage before we can open the gates for the season. Opening day crowds are usually quite large- as many of you know.

UPDATES: And by July 15th the berries were ready, right on schedule... our opening on Sunday the 16th was a banner day for the farm. There are many reasons to account for the crowds, which included many first-timers: word of mouth, our new FaceBook page, and/or the fact that we were featured in Cape Cod Magazine's ever popular Best of Cape Cod issue. Fortunately we had a great crew of helpers and there were plenty of berries to go around!