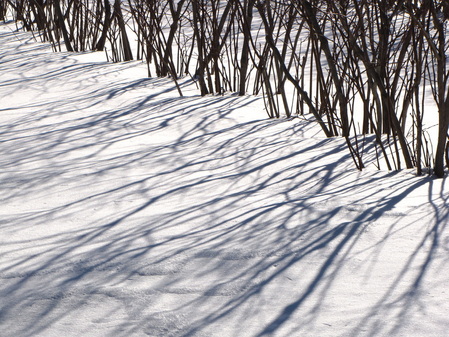 Punxsutawney Phil, everyone's favorite groundhog, did not see his shadow on February 2nd (it was raining here), so an early spring is predicted, which we would all welcome. The 2nd is also known as Candlemas, the half way point between the winter solstice, the shortest day of sunlight, and the spring equinox, when day and night are equal in length. It is said If on Candlemas it be shower and rain, winter is gone and will not come again. February also marks the beginning of the Chinese New Year- the Year of the Rabbit, and astrologically, It is, of course, the month of water carriers and fish.

Where the snow cover is warmed by the sun, watch for our earliest flowers, the white Snowdrop, which should be making their appearance. You may have noticed that by early February we have already regained an hour of daylight since the winter solstice! Though the full moon mid-month is called the Snow Moon, spring is not far behind.


And, as if in a parallel universe of their own, the blueberries sleep, dreaming of the coming spring and no doubt stirring a bit in these lengthening days. I imagine that they are not afraid of the shadows they cast in the snow, almost ready themselves to come out of hibernation.